It comes with great sadness and immense respect that I must announce the heartbreaking news that my father, Stan Major, the greatest man I've ever known, passed away at the age of 80 on September 25th, 2015.

Stan lived, without a doubt in my mind, one of the most incredible, storied, and satisfying lives anyone could ever hope for. The places he traveled, people he met, and memories he made were enough to last ten lifetimes.

Born Stanley Thomas Major on September 9th, 1935 in Paris, Illinois, Stan spent the better part of the last century journeying around the world, experiencing things of which many of us could only dream.

His life, in my opinion, has always been something to be celebrated. To my friends and I, my father's legend would grow with every story and recollection. It was for this reason that I insisted he begin writing everything down a few years ago. What started as a simple collection of documents on his computer quickly turned into the idea to publish a blog.

I believe it is monumental that Stan's voice and thoughts have been experienced across the entire chronological spectrum of media's technological evolution...from early 1950s local radio to being globally broadcast via NBC News during Vietnam, to national broadcast and satellite radio, all the way through writing a successful blog and having all of the aforementioned media archived digitally online. His work started on a Ham radio station in rural Illinois, and ended up being permanently archived for the entire world on YouTube, Soundcloud, and Google - to borrow a line from our favorite show, Mad Men... "He's an astronaut".

It pains me greatly to write these words, knowing how many of you have followed him over the years and admired not just his recent writings but his entire body of work. It has taken me the entire month to find the strength needed to make this announcement, and for that I apologize.

I will continue to update this blog and repost his best stories from time to time. It has long been a dream of mine to collect his stories, edit them, and turn them into a book for him. I was not able to accomplish this during his life, but still hope to out of respect...something I can pass on to my kids some day...if anyone out there knows someone who can help make this a reality some day, please reach out to me.

I thank you all for continuing to keep Stan's memories alive, and invite you all to revisit this blog, dive into the archives, and relive his stories with me. I assure you...there is some amazing stuff written in these pages. Please feel free to leave comments or reach out to me personally at followmajor@gmail.com for any reason.

And one last time, his classic line...

"This is Stan Major, NBC News, Saigon, signing off..." 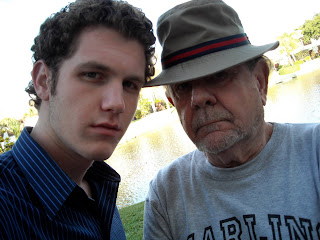