This is AFN (REPOST) 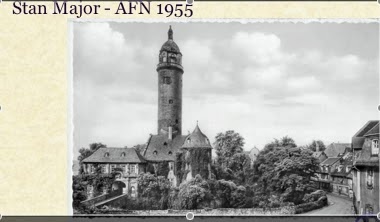 THIS IS AFN...THE AMERICAN FORCES


AFN was a big deal.  I was one of the announcers...one of about a few dozen who did news...read public service announcements in between records or played DJ to the average 22 million listening every time you opened a mic!
That’s right...I think that’s the number they told us.
Radio in Germany and France and Spain etc. was so bad that the Europeans took to listening to AFN by the droves.
We became “stars” overnight.  My favorite thing was to loudly call out some of my companions by name as we stood in the line for a movie or seat in a restaurant.
“Hey Nick Clooney...what's this film about!”
or...“anybody want Ray Van Steen’s autograph?”
The guys were not too happy with me but we WERE all amazed at the huge reaction to our presence.
I mention these guys cause they (and a few others) all went on to become famous and successful in later life.
Nick Clooney, (b.g...before George) was big in radio in his hometown of Cincinnati...and even bigger as a news anchor in at NBC TV Los Angeles and a movie host on AMC.
Ray Van Steen went to Chicago and ended up being a spokesman on the Allstate spots(I think) and becoming one of the top advertising guys in the business. Red Jones returned to Texas and became a legendary country/western jock.
And another guy...Steve Binder became Elvis’ tv producer/director and you don’t get bigger than that.
We also had Alan Landsburg at AFN.  He would go to LA and end up doing the biography TV series....and some really award winning huge documentary series...and one god-awful Jaws sequel which I'm sure he’d like to forget!
It was amazing...the true talent we had at AFN Frankfurt in 1954-56.
I think the best times we had were sitting on the castles moat wall overlooking the Mainz River and drinking our Hennigerbrau Beer thru the wee small hours and talking about home...our families....and whatever.  Good times there.  Not to be enjoyed again.
Anyone who was going to be on the air at AFN had to be cleared for “top secret”.  I had no idea why...but that’s the way it was.  You don’t ask questions...just give them the answers.  About the time they wanted my Grandmother’s birth place and date I was happy it ended!

Clooney told me later, after we got back to the states...and at his invite we were cleaning race horse stables at 5AM near Lexington, Kentucky...that the announcers actually set off the alerts in Europe.
We would be about to go on the air early in the morning and some non-com would bring in a public service announcement to replace the one scheduled (I remember this happening on my shift a few times) and that announcement contained a military code...a sentence or phrase... which when heard on the air would set the entire American military(and maybe British and French too) into action and on alert.
And I didn’t know we did that until Nick told me back in the states.
I spent some time at AFN Headquarters and then was sent to AFN Nuremberg...which kind felt like coming home.  I had missed my friends in Frankfurt, however,  and after a few months had a slight fender bender with an army car I was driving and my local AFN commandant got all bent out of shape about it.  I thought he was going to have me court-martialed over it...but he sent me back to Frankfurt-Hoechst for “reorientation”.  Little did he know I was delighted by the move and picked up with Nick, Ray and the guys where we had left off.
I remember Nick and I were going on R&R for a week..and decided we’d catch a free military flight to some place desirable.
Madrid was a possibility so we got into our civvies and were at the airport ready...but were informed the flight had been scrubbed.
What to do?  I plugged for Paris and the French Riviera but Nick said he would rather go to Berlin on a free MATS flight.  So we split.  I had a great time in Nice and Cannes...(been back several times) but Nick never said much about Berlin.  I always wondered about that.

Here's an interview I did for AFRTS archive