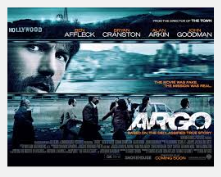 “ARGO” is an excellent movie.
I’m not a Ben Affleck fan but he got this one right.  It’s a fast paced film with little or no BS and it tells a great story of how one smart guy at the CIA  almost single-handedly got a bunch of American Embassy employees out of Iran.  Get a copy.  You’ll see what I mean.
Now...we have two good CIA flicks...this and “Zero Dark Thirty.”

I say Isis (the crazy) would do well to study both films...especially Zero Dark Thirty.
The gal the at CIA who stalked Bin Laden is probably zeroing in on Isis....so maybe if he watched the film he'd start running!
The only thing we know for sure is WHEN the Seals or others trap Isis...he won't be alive for long!
“Geronimo...for God and Country...Geronimo!"

stanmajor@aol.com
Posted by Unknown at 4:03 PM