Bill Ballnce HAD to be muzzled, then listen to John & Marsha 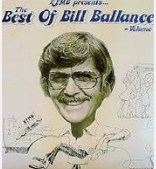 But Ballance was sooooo good...of course
he had to be muzzled!

Just as Wally Phillips had all the woman in Chicago listening every morning...for pleasant conversation...calling for gifts etc...
our next personality had every woman in Southern California listening....for far different reasons.
Bill Ballance (KGBS Los Angeles) is number 5 on my list of the greatest radio personalities...for his daily not to be missed “feminine forum” discussion of the sex life of the better half.
In the 70’s this show was the opening for others who would come along years later. The few times I had the opportunity to listen I  marveled that Bill could talk about stuff with women that you might save for parties or for your wife or mistress...or both.
But it was actually okay for radio....and it was a must listen... even for the guys...until it got too hot even for L.A...as open minded as that place was.
Ballance ruled the airwaves for a couple of years before management decided it was a just too much.  Today...it would just be an interesting sex talk program and not the extremely popular “side show” it was in 1973.  But there were problems...feminine groups...pressure on advertisers (which  only happens now to the likes of Savage and Limbaugh).
Bill Ballance was indeed unique and discussed subjects that needed to be banded about on the air...both funny and serious and for this he deserves to be named along with:
Gary Dee in Cleveland, Wally Phillips in Chicago, Neil Rogers in Miami and Long John Nebel in NYC as number five on my list.