Two of the best...both in the Windy 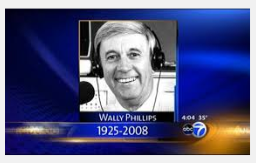 A Duo of my best personalities in radio history.....

It’s was said that every woman in Chicago listened to Wally Phillips.  There are probably numbers in rating books in WGN’s office archive that can prove that.
What can you say about the guy who basically held down the morning drive program on WGN for so many years...taking calls from “nice” people and having a surprise gift for them at the end of every conversation.
When I was Operations Manager for WWDB (FM) Philadelphia I instituted the same thing and now I admit where I got the idea.  Our fine morning personality Dominic Quinn handled it well too...but he was no Wally Phillips.  Wally would be my number two best radio personality...of all time.

Bob joined WGN from Milwaukee in the early 70’s where we both worked at WRIT AM/FM.  Bob was Program Director there and had hired me for their evening talk slot.  We were good friends.
Bob got a call one day from an exec at WGN...and went down to their studio for an interview and audition.  He told me the next day the so called audition was nothing more than a rigged call in show with WGN staff calling him on the phone while all this was taped.
Now in Milwaukee...and Florida and for most of his career Bob was a rock jock playing the hits...but WGN wanted someone who could take calls and handle listeners and maybe play a record once in awhile.  They loved Bob and hired him almost immediately.
Wally Phillips was still the morning guy so Bob was slipped into several slots and also used as fill in for Phillips.
When Wally retired and that slot became available...WGN knew who could fill it:  Bob Collins.
And, of course, Bob was great...smooth and friendly just like Wally....and he would probably still be there today if it wasn’t for his craving the excitement of flying light planes.  He crashed in the Chicago suburbs and that was the tragic end of a great radio career.
He paid me a huge compliment a few years before that mishap took his life.     He liked to vacation in Phoenix where he had a fancy motorcycle stored away just for his use.
I was on the air at KFYI in Phoenix doing my talk thing when he magically appeared unannounced in the control room...smiling and waving at me.     During a break I grabbed him by the arm and pulled him into my studio and sat him down at the mic. He didn’t want to go on the air...but I forced it.
He invited me to visit him at his hotel in Scottsdale but I had some commitments that evening and missed that chance.
He was killed not long after that.  Bob was an excellent replacement for the great Wally Phillips...and he was great in his own way.

A personal note here.
I’m a guy who doesn’t like small planes.  I had to fly in a bunch of them in the three trips to Vietnam and had no choice. and there, of course, were a lot of helicopters too.  I came out of that swearing to myself that I would never again fly light or in a chopper.  I succeeded in that and I’m still around to write this blog years later.
I was at our family home south of Rockford, Illinois when the news came on that NBC News Chicago anchor Floyd Kalber had crashed his light plane into a cornfield about 20 miles from us.  Thank heavens he was unhurt.
A couple of years later I would be writing for Floyd and we would discuss small planes and disagree.
WGN Chicago lost two really great personalities who will be remembered as the backbone of that great radio station in its best years.
________________________