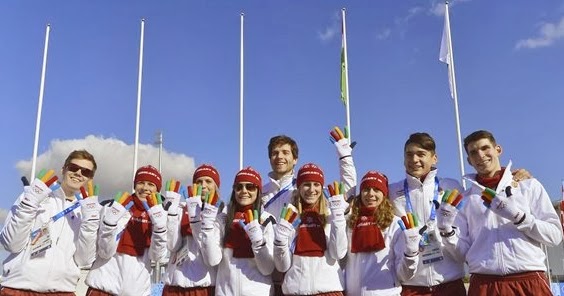 Update on good looking Olympic team from Hungary...no medals but should win something for best looks!

Before moving to join Neil Rogers on the radio in Miami I did a few things that might be of interest.
I drove over to Iowa three days to work as an extra on Sly Stallone’s new movie F.I.S.T. (see post)
I also “auditioned” for WBBM-TV CBS Chicago and hosted for one Saturday their late night TV talk program. I wasn’t hired.  But it was something I loved doing as I had been a big fan of my friend Kup (Irv Kupcinet of the Sun-Times) who brought the “lively art of conversation” to TV for years with memorable guests and topics.

Also in 1978 I stopped off in beautiful Panama City in the Florida panhandle to anchor the tv news on the NBC station there.
While I was there Hollywood had come to Pensacola beach to film “Jaws 2” with Roy Scheider. We tried to set up interviews but were told they were having filming problems so that didn’t happen.
Finally...the stench from the big paper mill was continually bad in Panama City (hope it’s better now) so when the offer came to go to Miami I jumped at it.

stanmajor@aol.com
Posted by Unknown at 4:42 AM