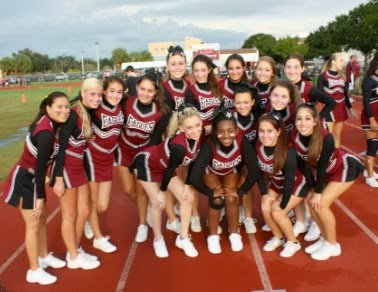 paying to be cheerleaders?

We had a scandal in one of the huge High Schools in Broward county (Fl) a year or so ago.
Seems parents allegedly had to pay to get their daughter(s) on the cheerleading squad at Douglas High School near snobbish Parkland, Fl. (see my post on the Heron Bay super Walmart there). As if the affluent parents couldn’t afford it  right?
This reminded me of a so-called scandal way long ago in my birth town of Paris, Illinois.
We are going way back to around the late 40’s.  Thats what I said...let me repeat...a long time ago...1949 .
Ernie Eveland was a god in Paris.
Ernie was basketball coach and I would guess Gene Hackman in “Hoosiers” was patterned after him and not vice versa.
Now you are asking were the Paris(HS) Tigers any good on the court?  You better believe it!  Those were the hey days of high school basketball.  Illinois still had a tourney named the “Sweet 16” and it was the envy of all other states.
The great thing about that tourney was everyone was eligible depending on their record on the court. Today they have crummy divisions or somthing...taking away the excitement of a small town high school creaming the mighty Dunbar from Chicago!
That’s what the Paris Tigers did in two seasons...state champions twice and to get there they had to battle the best of the giant schools in Chicago and they beat em up good.
We had left Paris for another central Illinois city, Effingham, but I kept a close eye on the Tigers as they progressed at the sweet 16 in Urbana at the University of Illinois where the tourney was played.
When they won the second championship I told my Dad that I wanted to go over the Paris to see the team return after the game and he agreed.  We hopped in the car and along with Mom and my sister Sallee (four years older than me) and we were on the streets when the team came riding in on a bright red fire truck with siren blaring...for the celebration in the gym.  I can still remember some of the names after all these years.
Bob Owens was the number one all-state center his whole HS career.  Glen Vitor a forward was rough and tough and my favorite. And of course Coach Eveland was the toast of the town.
Now here’s what all this is leading up to.

Coach Eveland was building a lake house north of Paris on one of the twin lakes.  So of course to keep his boys in shape he had some of the team members out there helping with the construction.
Well...you probably guessed what happened.
One of the city’s uptight citizens didn’t like that at all.
He started a campaign against Eveland for using “slave labor” to build the house!
The upshot is this marvelous coach got canned(or quit)...but here’s the kicker.
Later on...the high school gym was named after the coach!
How's that for real ambiguity!!!