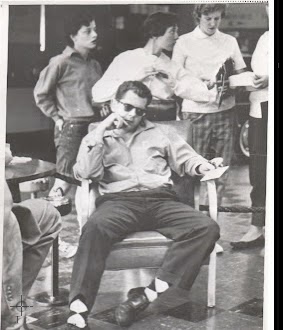 When I was a rocking jock at WIRL Peoria back in the late 50’s...we were busting the race barrier well...with Fats Domino, Chuck Berry and guy named Ray Charles.

We got a record that had two parts...part 1 on the front of the 45 RPM and part 2 on the back.  Needless to say this was unusual but who cared. What’d I Say was a fantastic performance bound to be number one fast.
We played the heck out of it for a few days...and then the record company sent us more copies but asked us to replace the original because of a flaw of some sort. I sure didn’t hear any flaw!
The replacement version was good...great even but it just didn’t have the same feel.  We went back to playing the old version until it wore out.
Today...the only version of this classic Ray Charles hit anyone has is the second version.  And still...it just doesn’t move me as the first promotional version did!

I needed to replace my dead Mr. Coffee and figured I’d buy one out at my favorite Walmart at Heron Bay(see my post)
I was passing the Coral Square Mall (where there’s a race to see if Sears or JC Penny closes first!)
There’s a Kohls in there and I decided I’d check all three stores skipping Macy's for obvious reasons($)
I surveyed the coffee makers at Kohls...pretty high (as usual)...but as I turned to go I spotted a Black & Decker 12 cup programmable on sale for $19.95!
I knew I wouldn’t beat that price and I like B & D anyway...had one for a few years...no problems.  I grabbed a box and learned a lesson.  You can find something good and even at reduced price but you’ve got to look hard.  I got the last one they had too.  I’m  happy.
----------------------------------

Couple of emails from females wondering more about THE WALK,  I described earlier.  I’m thinking on it.  I’ll let you know.