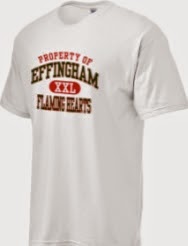 ....High School shenanigans
When I was a senior at Effingham High School in Illinois...for some strange reason I took it upon myself to get several guys rounded up and a pickup truck from one of them...and in the midnight hour before the big basketball game with our arch rival..T-Town (Teutopolis)...we drove to the north end of the gym where a local civic club(forgot the name) had parked a Liberty Bell replica on the grass which was supposed (I guess) to go to the winner the next night.
I had this great reverse psychology idea that we’d
haul the bell over a few miles east to the T-Town high school and dump it in their front door.
That way, I argued, the guys from T-town would be blamed for stealing the bell and we’d get a good laugh out of the whole gambit!
There was only one hitch.
The do-gooders who owned the bell...not known to us...had recently painted the bell a bright gold color.  Of course every one of the guys helping to lift the bell into the truck and out at T-town were covered with gold paint!
When we all got back home clothes had to be trashed and paint remover found at about 2AM...so if someone came nosing around they would not be able to nail the deed on anyone because of fresh paint on their arms!
I remember a local police officer paying our house a visit and I denied being involved....probably while hiding my arms from him.
Don’t remember who won the game that night.