Update...it was C. Geary not J. Turner on the phone! 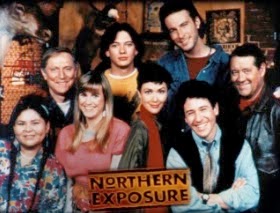 ...62 degrees as I write this in Miami...can you believe! I didn’t see the two Whistle Ducks on my walk to get the mail.  I wouldn’t blame them for flying “south” to Key West!
Hal reminded me today of the fun we used to have on the national show with the gals and guys on one of the hottest tv shows going in the 90’s, “Northern Exposure”
One of the stations taking my show was a big boomer in St. George, Utah (God’s land)...KDXU which covered Los Angeles like a local. So I made some calls about the show and somehow got them interested....to the point that I got their nightly “cast call” number and would dial it up on the air live.     It was a recorded call each day listing the cast members needed for the next day’s shooting!
Hal and my other listeners got a kick out of that.
I  also had a big thing going about Janine Turner....hot, hot lead superstar. I think I did a phoner with her one night.
This was kinda the same thing I did in Miami with the Miami Vice guys. (see Vice posts)
Anyway here’s the IMBD site for the show...Cynthia Geary still looks great!

Janine's keeping busy, that's for sure...has her own radio gig on XM and out of Houston:

We had Cynthia Geary on one night when I board oped for you, and a prankster or two who said they were Janine just to get on the show, but not the authentic article...