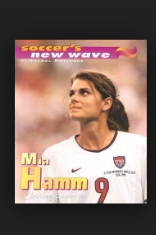 
and then I wrote....No she’s not Mia Hamm......but she is a really attractive GK for the University of Arizona soccer team!
---------------------------
.... There was a time back in the 90’s in Miami when Neil Rogers great local talk talent... and I were hanging out.  Actually we were in his Corvette driving along the beach at Spring Break...that is whatever Ft. Lauderdale allowed as SB.
Neil startled me by saying the Atlanta Braves were looking for a play by play guy and he might submit some tapes.  Neil did a great job broadcasting the  University of Miami Hurricane’ s baseball games.
He said the only thing that might stop him was the “gay” thing.  Neil had “come out” on the air a few years earlier.
I was pulled two directions on this...first I wanted him to remain on the station WNWS Miami where we were both having great success.  But then...it was a fantastic opportunity for him.
But I needn’t worry about it...
He said “they would never hire a gay!”
So he didn’t even proceed.
I joked later that he should have applied and when they said no...sue them for big bucks on a
discrimination charge!
Thank god he stuck with talk radio!