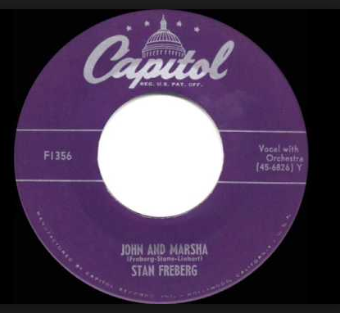 Stan holds a special place in the hearts of radio people, because almost nobody else was as masterful at creating sound, and then using it to motivate folks to buy something or do something. Often they’d be laughing as they did it, because of Stan’s writing and/or voice. If you were starting up a program like the Radio Mercury Awards today, you might even call the trophies The Frebergs. Stan was that good when it came to radio. Of course he applied his talents in many other directions. Variety says the Pasadena native “started voicing Warner Bros. cartoons as soon as he graduated from high school.” Stan was heard in Disney’s “Lady and the Tramp” (as Beaver), as Wile E. Coyote’s father in “Little Go Beep,” and he acted in TV shows like The Girl From U.N.C.L.E. and “Roseanne” (as Mr. Parkin). Freberg produced comedy albums with a satirical bent and had bona-fide chart hits, including “Green Christmas” (about commercializing the holiday) and “John and Marsha.” (That was him doing both voices, with each character saying the other’s name in a succession of emotions and inflections. Listen and laugh here.) NBC News rounds up a choice collection of YouTube links to other Freberg classics, here. There was also Stan’s late-1950s show on CBS Radio network, where he refused to accept tobacco advertising, and made up his own sponsors. And we should honor Stan for the work he did on behalf of the radio industry –