the price of BEEF! 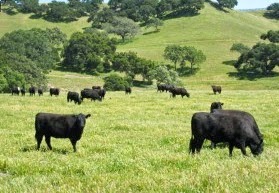 So if WLS Chicago was still the Prairie Farmer Station like in the 50’s and 60’s they would be riding high with the farmers and the prices now.
My father wouldn’t believe it...
He owned three farms in Northern Illinois that produced well...but he never really made a dime.  The gentlemen farming our land just broke even.  We always had pigs...made no real money off them...had cattle for awhile and lots of steaks in the freezer...but not much cash from em!  We had a lot of great corn and soybeans...and I won’t even bore you with the prices on that then.
I wonder since the prices are up...if the government subsidies to farmer have been reduced?  Probably not...the government doesn’t work that way.
I’m very happy for the farmer...it’s been a long time coming!

--------------------------
My dad used to dabble in the futures market but he held on too long and never made much.
I played a couple of grand at the recommendation of one of the farm experts at good ole WGN on their noon farm show.  My timing was good and I got all excited because I think we just declared war on Iraq and were sending troops there and I figured my money would be well spent...future prices should go thru the roof.
Except the guy the WGN fellow sent me to invested my two grand not in oil...or any other commodity directly impacted by war....but SUGAR!
You guessed it...sugar is the only thing that didn’t go up...it went down, as a matter of fact, and I lost my two grand.
The guy’s company later went broke (wonder why) and they were sued by a bunch of investors but I didn’t join them.
That was it for my market test.

Anyone know where I can get real Kobe beef...the the U.S.?

stanmajor@aol.com
Posted by Unknown at 9:25 PM