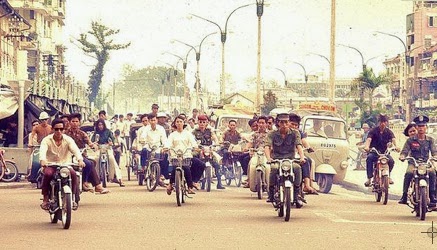 Doing a daily radio show from the war zone!  This was my 2nd trip to Nam.

Dan Rather had just arrived for CBS news and he sat for one of my shows.  We did it high atop the Caravelle Hotel in downtown Saigon but about halfway thru the interview the reel to reel tape began sticking....because of the heat.  So Dan calmly took his finger and helped me keep the tape going while we finished off the hour. So just envision Dan Rather doing that...it’s pretty hilarious!  Of all the correspondents famous and not yet famous I met while in Nam, Dan was one of the nicest. I ’m sure to this day he probably remembers that interview...not for what was said but for the magic “tape saving” he did.
I recorded another hour show in the very busy control tower at Tan Son Nhut airport....actually the busiest airport in the world during the Vietnam war.  As I was interviewing the air traffic controllers I noticed they were having trouble communicating with income planes.  Later when I listened to the playback I found the reason.
The Germans made those little Uher recorders so powerful that my tape recorder was the culprit.  In fact the pilot’s conversations were so strong on the tape I had to dump the show.  Thank heavens I didn’t cause any planes to crash!
After taping a show up north in Danang...I caught a late flight that arrived in Saigon after the nightly curfew was in effect.  A couple of MP’s were kind enough to drive me into the downtown area but I still had to walk about ten blocks to my hotel.  as I turned off one of the main roads to get to my hotel I heard some strange animal-like noises.  A light from one of the buildings revealed that just in front of where I had to walk were hundreds...maybe thousands of rats.  It seems they like to take over the city after the curfew starts.  well...this is a scene right out of Hollywood.
I clapped my hands...yelled as loud as possible and stomped my feet for sure...to scare off enough of the little buggers so I could finish the last block to the hotel.  Something one never forgets!

Some thoughts on my second Vietnam tour.

my email:
stanmajor@aol.com
Posted by Unknown at 12:41 PM