the cubans are coming? 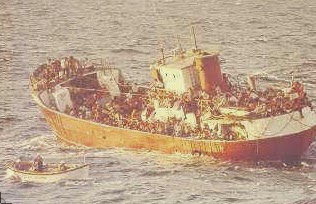 The sight of what we used to call “illegals” streaming across the border in droves must be resonating in land-locked Cuba and I’m wondering when another “boat lift” will begin.

The Mariel boat lift back in 1980 dumped about 125,000  on these shores.  And it’s remained about the same even though Castro is no longer a force and their main supporters...the Soviets (gone) along with a cooling China and a crazy North Korea....probably not much help.

So...how long will it be before the Cubans come again.  Not long I’d guess...they are probably organizing now.

We “anglos” here in South Florida wondered what that first migration would do to us.  Neil Rogers and I were the only people, it seemed, against the boatlift. Actually I got out after the Mayor of Miami publicly called me the Joseph Gobbles of Miami.  I headed for heaven and the main line in Philly.  I’m back now for nearly 30 years and the change has been significant...but not  the way you would have thought.
Dade County (Miami) IS basically Hispanic.  There are areas where you have a hard time finding anyone who speaks English.
But the real surprise has been Broward County.  I don’t have the numbers, too lazy to research it.  But my observation living here continually the past 30 years is Broward County was besieged, but not Cubans...but by Miami blacks who saw their “ethnic” advantages disappear when the Cubans took over.  Their jobs went to the newly arrived Hispanics.
So...they moved into Ft. Lauderdale and other areas in Broward county.
Now...keep in mind...many of the non-whites are not from St. Louis, Chicago or New Orleans.
They are from the Islands...the Bahamas, Dominica, El. this and St. that.  And they are kind of an interesting brew of ambition...hard working and really desirous of being in this great nation and getting a good education for their kids and working hard and not prone to seek handouts from anyone.
I do admit if you are native of the Islands you probably come here speaking our language which is a gift...but they also retain traits from home and they didn’t (for the most part) HAVE to run away from it. That may sound harsh...but it’s true.
So...Broward County has changed quite a bit from all this influx.
It’s still a little unnerving to those of us “anglos” who recall the rallying cry of Freedom in 1970...
“WILL THE LAST REAL AMERICAN TO LEAVE
HERE...PLEASE BRING THE FLAG!”

stanmajor@aol.com
Posted by Unknown at 8:01 PM