A daughter's thoughts of her Father...a Very Good Man! 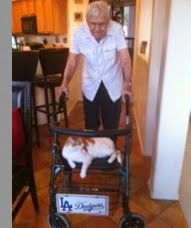 Dad, his stroller and Sophia the cat!

SM: Of all the members of my family...this is the one I admired almost the best.  I’ve asked his Daughter to paint us a written portrait of her Father, Frank...my Brother In Law.
Enjoy:

My dad had three names, Ted, Frank and Zeke.  He was born in 1920 and lived to be 92.  His parents were immigrants from the Ukraine, but totally transitioned into American life and shared little with their children about the old country.
In lieu of working on his father's dairy farm in upstate NY, Dad chose to join the Navy when he turned 18, he was sent to the Pacific to work on war planes.
He married my Mom quite impulsively during WWII and spent their honeymoon in Saipan.  Dad went on to become an engineer and start a family.
After about fifteen years, mom and dad had me and my brother soon after.  My brother, Mike was diagnosed as Downs syndrome when he was two to three years old, both mom and dad were dedicated to his care.    Dad was Mike's favorite, able to communicate very little, he loved taking dad's arm and leading him to the frig to get some orange juice.
Dad was a very nice, quiet and patient man.  Don't get me wrong, when discipline was called for, he was up to task.   I remember when I was six, he caught me  and my friends jumping on the bed (which I had been told many times 'not to do').  He calmly told us to 'get off the bed' an walked away.  A couple of hours later, I walked into my room, and there was the broken wooden bed slate hanging prominently on the bedroom wall...life lesson learned..."own"  your actions.
Later in life, Dad took care of Mom as she grew ill and  he worked very hard as we know she was not an easy person to please. I was fortunate to have Dad move to my city when Mom passed and he lived in our house the last two years of his life.  Dad loved traffic (he commuted to downtown LA for years and one of his favorite things included asking me to wheel his walker to the main road at evening rush hour to watch the traffic), he also loved baseball, Cheetos, ice cream and red wine.
Dad had a way of brightening everyone's day, everyone speaks of his 'nice smile'.  We would walk into any doctor office or hospital and the 'world' would just light up with his smile.  He had a positive nature, he was always able to have a 'half-full' attitude when the Dodgers lost a game.  He spent his last year in much pain, but chuckled at the antics of our cats and dogs at the house.  His favorite was Sophia the kitty, no matter how bad he felt, when she jumped up on his walker, he mustered enough strength to give her a 'ride'  around the house.  Dad has been gone for two years, I still have his walker with the Dodger license plate on the front, it will be the last thing I part with.  Taking care of an elderly parent is one of the hardest jobs in the world, I consider it a privilege to have been able to spend time with Dad and to have given him a little 'help' when he needed it.  Miss him.

Thanks Laura.  You brightened my readers lives also.