making friends on the BUS! 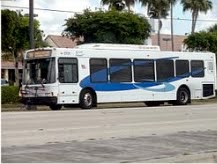 ...some interesting things happen when you leave your car at home and decide to take the bus for a
change.
The busses here in this part of South Florida can be a wee bit erratic....time wise.
But today...with some some exceptions they ran on the scheduled time and weren’t crowded despite lots of shoppers in evidence.
I had a couple of stops to make and when I finished...I was NOT on a bus line so I up and started walking.
I passed the Broward Health hospital...big competitor to my guys at University Hospital.  For a moment I though about going in and asking to see someone in public relations so I could get some material to use to give them a fair shot.  but I was getting tired and I just kept going.
Than as I ambled down the sidewalk seeking the best shade I could find there was a father and son combo each riding bikes...home from school.         They were passing about twenty or so cars lined up waiting for kids to come out of the school.
...the Father said “coming thru” and I moved off the sidewalk and as they passed I complemented them on the boys bright green/black helmet.  the Father gave me a thumbs up.  And that was good.

Ah but the good things are not over on this elongated local bus trip.
I got my 4 Mac burgers for the two dollars (Wed & Sun) and joined a young lady sitting on the bus bench.  She had the full load of electronic stuff...the headphones...cell phone on which she was texting messages so I didn’t impose.
After while she seemed to tire of all that and I ask her if she was going to Taravilla High School...nearby.  She said yes.  I said my step daughter was there about ten or so years ago and got a great education.  And she went on the college and has been very successful in her chosen profession.
By this time we were in the bus and she (surprisingly) sat next to me...not something a teen girl is likely to do with a old guy like me.
We chatted just a bit as my stop was coming up and I got up and as I did...she rose...as if politely thanking me for the conversation.  I didn’t get that until I was off the bus and I had turned to say “goodbye” and she responded accordingly.
Wow.  How do you top this...huh?
I entered my complex feeling pretty good.
It was something to cherish and remember and I wanted to share it with you in the 85 countries around the world where this blog is read.
Wow!

stanmajor@aol.com
Posted by Unknown at 7:48 PM