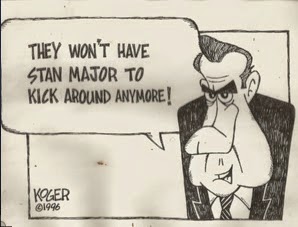 July 4, 2010| By Tom Jicha, Sun Sentinel
Stan Major has had quite a career, busy and colorful. He broadcast daily from the war zone during
Vietnam. He claims to have broken the JFK assassination on radio when he was working in Boston.
While at then WNWS (AM 790) in Miami, he woke Richard Nixon from a nap and got the disgraced former president to chat on the air for 20 minutes.  And he ran for the state senate in his home state Illinois at the same time a future president was doing the same. "If I had won, I would have been there with (Barack) Obama," Major said.

But South Floridians will remember him for some raucous years in the late '80s when he and Neil Rogers ruled the market. They were well ahead of the pack arguing daily that Fidel Castro was emptying his jails
and shipping criminals to Florida.
Major said the backlash led to him leaving South Florida. He went to Philadelphia, then other stops before launching a nationally syndicated overnight show.
Although he has worked all over the globe, he never lost his affection for South Florida and has returned
here. He is "semi-retired" and living in Tamarac.
What does semi-retired mean?
"It means," he said, "I'm keeping my options open."

Question:
Seven days, six nights, all expenses paid, my dream vacation destination is...
“Las Vegas. I haven't been there for years but I have great memories. I was Col. Parker's guest to see
Elvis at the Hilton in '70. "E" shook my hand from the stage. I DJed at the radio station in the back of the
Flamingo. I saw Don Rickles at the Sahara, Harry James playing and Betty Grable sunbathing.”

A place I might like to live other than South Florida is...
“The French Riviera. I've been lots of places in Europe and Asia but Cannes, Nice and Monte Carlo are tops (if you can afford them). I've enjoyed the Riviera four times. I could happily eat my last meal at one of Picasso's favorites, Colombe d 'Or, high atop St. Paul-de-Vence, north of Cannes.”

A movie I never get tired of watching is...
“The original "Day of the Jackal," with Edward Fox.  The book by Frederick Forsyth was exciting and Fred Zinnemann's rendering even more so. They say Fox had a problem getting the character. It sure doesn't seem so on film. He's scary, cool and frightening.”
Growing up, my hero was...

“Stan Musial of the St. Louis Cardinals.  I lived in Effingham, Ill, .about 40 miles from St. Louis.  My Dad
took me to the old Sportsmans Park when I was a young and I always looked forward to waiting outside
the clubhouse for Stan the Man to come out and sign autographs.  He would tell us he would sign for
everyone but we had to follow him to his car.” (I think he got paid by the rest of the players to draw us
away!)

When an out-of-towner comes to South Florida and I want to impress them I take them to...

“They would go to South Beach and Las Olas on their own. I’d surprise them and take them to Shark Valley, part of the Everglades Park, just off Tamaiami Trail.  Without telling them why, I'd make them take the trail and watch their expressions when we had to walk around the first gators dozing on the walkway!”


stanmajor@aol.com
Posted by Unknown at 4:18 AM