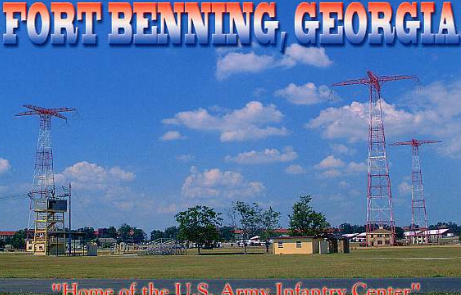 So says our friend Hal:

Like anyone else who has gone through Jump School at Ft. Benning, Ga, my first jump was a daytime training jump in the third week. (We all had to do 4 daytime & 1 night jumps to get our jump wings.)
Ground week, the first week, we learned how to fall and land without breaking our neck and other body parts. This was done, as the name indicates, on the ground. We ran, we tried to push away Georgia (push ups for the uninitiated) and lengthened our arms doing what seemed like 6 million pull ups. We also had classroom time.
The second week, tower week, was a different kind of "fun".
This was the week that a lot of guys figured out that height was not something everyone handled well.  Oddballs like me, who found ladders to be a natural fear based laxative, had no problems with the height coming out and off of the swing training towers (34' high). This training allowed us the practical experience of keeping each corresponding foot and ankle together and how to roll at the end of the PLF (parachute landing fall) to reduce injury potential.
The 250' towers were something else. You don't climb those towers. To oversimplify things, it's almost like a carnival ride because you're strapped into a harness that lifts you backward to the tower arms.
As we were looking at the towers up close to their bases that first week, I recall looking up and muttering "shit...".
I immediately heard a voice behind me
"That's a common word heard several times a day here." I quickly turned around and was face to face with a Major. Coming to attention and giving up my half of a salute, the Major offered up his half of the salute and ordered "as you were".
He asked me if I was scared and I gave him an honest, "Yes, sir.".
One of the "Black Hats" (instructors) came running over asked if there was a problem. The Major dismissed him saying he had started the conversation. Giving me a quick glance that read out in capital letters as "Boy, don't "eff" this up !", the Black Hat turned and double timed away.
The Major asked how afraid I was and I told him "Not enough to quit.".
He clapped me on the shoulder, said "Good Man." and left after salutes.
The Black Hat motioned me to double time to where he was and, shall we say, suggested I tell him about the conversation I had with the Major.
I told him word for word and he laughingly told me I was not in trouble, this time, but to be more aware of my surroundings and not let there be another opportunity for anymore of those "chummy little
chats" with officers.
(end part 1)

stanmajor@aol.com
Posted by Unknown at 7:47 AM