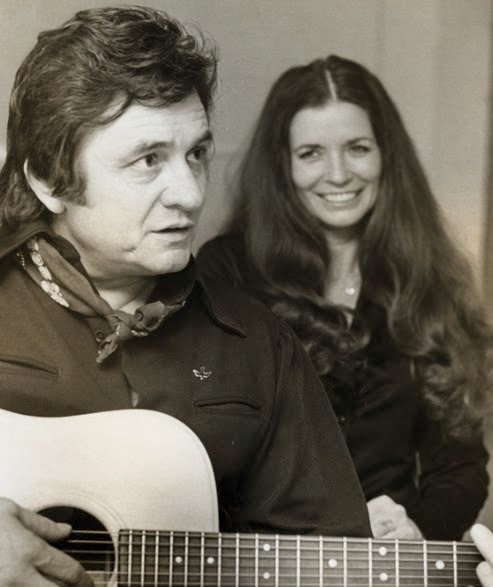 Blog viewer Randy was spurred on to this interesting bit of fluff...after reading my tribute to Little Jimmy Dickens:

"When I was a wee lad, I actually attended June Carter's first wedding to Carl Smith. It was held right across the street from the Sam Houston Elementary School on Melrose Ave in Maryville, TN.    I had grown up,in that neighborhood and my Dad was friends with several friends of hers when she appeared at an Opry like show called The Midday Merry-go-round broadcast daily
live from the studios of WNOX (AM 990) in Knoxville. That's also how and where my dad (and I) got to know Chet Atkins and Homer & Jethro (Henry Haynes and Kenneth Burns).
Getting back to June Carter Cash, it was through her that I got to meet and spend about day and a half with her and Johnny Cash  They were filming a PBS show about the “Trail of Tears”. Johnny played Chief Ross and June played a farmer's wife.
The scenes were shot in the Cade's Cove area of the Great Smoky Mountains National Park.
I was home on leave and the Sheriff asked if I'd help with keeping  people out of the scenes etc.
Shortly...I went up to June,introduced myself, told her
about being the kid who years ago...had thrown snow balls made out of ice cream at other party crashing kids.
With a few seconds recollection, she remembered the incident and laughed heartily.

Got to spend a lot of time with them then, but never crossed paths
with either of them again."

stanmajor@aol.com
Posted by Unknown at 8:26 PM