Miami Vice folks headed here....Jeb's headed to the big White House and the others know HE CAN win! 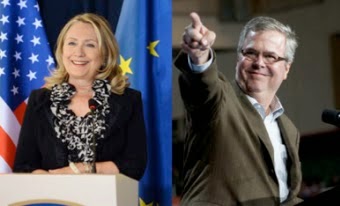 ....So who’s AGAINST Jeb Bush running for the Prez?
I mean except the Democrats who would have trouble beating him after Obama.
I think there are “enemies” like Barbara Bush mentions in the following article...and they would probably be Republican right wingers of the “Rush” followers....and appear on Fox news regularly to poo-poo Jeb’s running.
Anyway one of his sons is the basis of this story about the former Florida Governor.

I’m relieved......China is still with us on the blog.  I had worried the past week because no China views showed up(Google) but there were a couple overnight.        I had said something about Hong Kong but didn’t take sides...I love that City...my favorite in the world.  I just hope some kind of agreement can be reached.
I would like to offer to negotiate just to get a free plane ticket to visit it again and a chance to stay at the Mandarin Hotel...the BEST in the world.
Russia is also still with us (& the Ukraine)....so Vlad... I’m still hoping for that medal for my Father’s work in Persia building airstrips to fly food and supplies into Stalingrad and Leningrad to help beat the Nazis!
------------------------------

Thanks Stan.
Doing a personal appearance in Fla...in February.
The Miami Vice cast, Saundra Santiago, John Diehl, Olivia Brown and I will be appearing at the Shock Pop Comiccon in Ft Lauderdale FL. Feb. 13-15, 2015.
click below for more info:

stanmajor@aol.com
Posted by Unknown at 9:26 AM