....If you lived in Central Illinois in the 40’s...like me..one radio station boomed in with great country and western stars singing on the Grand Ole Opry...that was WSM in Nashville.  A regular FOREVER on stage was Little Jimmy Dickens. His passing is noted by me as a small tribute for the music and fun he provided a young guy who would eventually make his small mark on broadcasting.
So..I thank him here.
****************
“ .... Little Jimmy Dickens was 94 when he died last Friday, and for more than six decades of that lifespan, he was a signature member of Nashville’s Grand Ole Opry. The Tennessean says “he was a vital part of the scene both onstage and backstage.
His dressing room was an essential stop for performers on the show, and it was there that he held court for a variety of artists, some of whom came to the Opry more than a half century after Mr. Dickens' 1948 debut.”
He’d performed at the WSM Nashville (650)-based Opry less than two weeks before his death, on December 20. You could see some of his patented self-deprecating jokes coming a mile away, like "I'm Little Jimmy Dickens, or Willie Nelson after taxes.”
Dickens was elected to the Country Music Hall of Fame in 1983.” 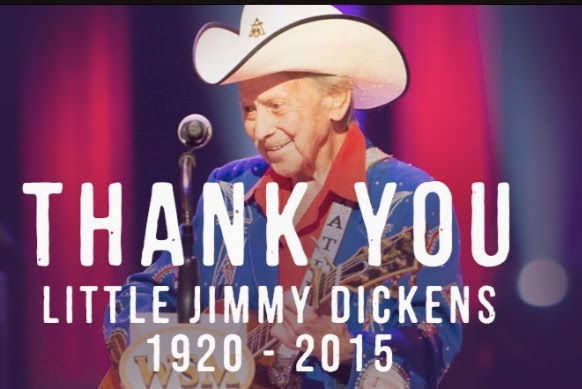 His hits...& some of my favorites:

May the Bird of Paradise Fly Up Your Nose,
Take An Old Cold Tater,
A-Sleepin' at the Foot of the Bed,
Another Bridge to Burn,
I'm Little but I'm Loud,
Country Boy,
No Place Like Home for Christmas,
It May Be Silly,
Take Me as I Am,
Salty Boogie,
Black Eyed Joes,
Country Music Lover,
Pennies for Papa,
Farewell Party,
Handle With Care,
You All Come,
Poor Little Darlin'

stanmajor@aol.com
Posted by Unknown at 6:20 PM