After that lightning smashed my computer...son Chris posted this for me

Chris Major here. Below is a repost from one of my Dad's favorite blog entries. I feel it is appropriate since I just recently moved to LA a few weeks ago. My father's travels and stories were big inspiration for this move, so this one goes out to him. He'll be back posting in a few days while we get his new computer taken care of. Thanks for reading! - Chris Major 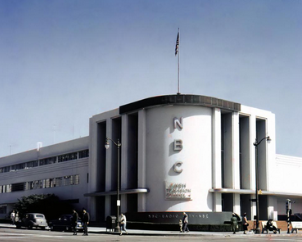 My love for “Hollywood”  began when my Father took us on an extensive western trip....and I mean we saw everything from Illinois to Southern California and on up to Washington State. The only thing that really impressed me was Hollywood..the..movie studios..NBC and CBS...fancy theaters (can you say Grauman's Chinese Theatre?)...Alan Ladd and John Wayne hand prints among many.
We took the movies stars homes tour. I really got the bug about the place. Mom and Sallee went to Catalina Island and I dragged my Dad to several radio shows. I was most impressed by Lux Radio Theater and The Railroad Hour with actor Gordon MacRae. That was basically a musical hour sponsored by the nation's railroads.  The announcer for the show was Marvin Miller who would become famous later as the star of “The Millionaire" tv show.  When we returned home I found Miller's address somehow and wrote him a letter and he actually responded a few weeks later with a hand written two page letter!.  Nice guy!

So...I had the "Hollywood" bug. I would return to that area on at least three or four occasions...try the acting bit and search for radio work. The only acting bit I got would be in 1960 on the original Bob Newhart show at NBC. I donned a Dodgers uniform took a glove and rushed onto the set on cue to catch a baseball in a fireplace. That Newhart show never made it to dvd so no one will ever see that great catch!
The casting directors out there had a great gimmick not to put you to work.
They would say are you SAG...the Screen Actors Guild union?  And of course I wasn't.
" Well, you can't get a part unless you are."
"Wait a minute where do I get the card."
"Oh...you can't get a card unless your have a part!"
What a scam!

Another one...I had an appointment to see a top casting director and when I walked into her office she screamed at me:  "You've been here before!!!"  I said no...I've never been here.  But to no avail.  That was her way of eyeing you and getting rid of you quick. Nice people.

Even with that kind of crap to deal with I still loved the challenge....the possibility that something might break...the phone might ring.  But, of course for me and millions of others on the same path...it didn't happen.