Remember the good old days when you could dial 0 and actually talk with a phone operator.  Can  you still do that or do you get a computer?
Nighttime operators were like a dating service.  I ended up with a few of them. I guess it was my voice.  Mellow.
__________________ 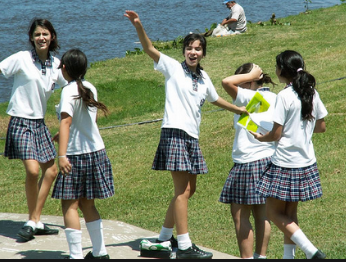 I was interviewing some Catholic school girls for tv once...plaid skirts and all and was amazed at what they said on camera.
They told me their outfits were so unfashionable (because of the Nuns) that to retaliate many of the girls upon exiting the school for the day would roll the waistline of the skirts over and over until they showed a “proper" (or improper) deal of the legs!
I always wondered how the Nuns reacted if they saw that on the TV news.
____________________
Hal on bridges.....

"By the way, meant to say something yesterday. I'm the same way about bridges. Flying doesn't bother me, I used to be able to jump out of a perfectly good airplane (not any more !), stand on the skid of a helicopter while it as flying only secured to the chopper by a "monkey tail harness" & other crazy death ignoring feats of stupidity without hesitation and fear. I always hated bridges and have never been wild about ladders either."

stanmajor@aol.com
Posted by Unknown at 1:58 PM