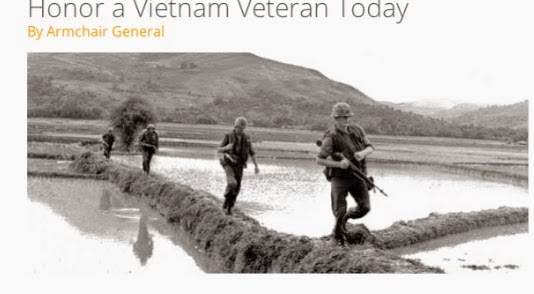 Our friend Hal...with some memories of Vietnam:
Hal says:
“Anyone who has ever been in the military realizes how aggravating officers can be, especially in their formative years, such as a slow learning 2nd Lt just out of some alleged military academy like West Point. Fortunately, most can grow out of it if they'll listen to their NCOs long enough to stay alive.
In the early 1970s, in a lowland area of South Viet Nam, and on the verge of wrapping up a daytime patrol, the Lt. took point as we walked the dikes on our way thru some rice paddies.
A group of locals were working double duty in a paddy, watching their rice and watching us. One of them jumped up and started running away. The Lt yelled a VN phrase right out of his newly issued "Speak Like a Local" language book.The runner didn't stop, so the Lt applied the brakes for him with his M-16.
When we got to the runner's body, we were impressed with the Lt's markmanship.
I asked the Lt why he "lit the guy up" and his reply was that the guy didn't do what he told him to do.
Grinning, I told the Lt that the road runner had done exactly as he said. He had yelled "Dung ho".
Did he mean to have yelled "Dung lai" which loosely translated to "Stop ! (or don't move/run). He'd yelled to the guy "Dung ho" (as in be quiet or don't talk).
I said, "The guy never made a sound. And he got shot for "following orders."
It did turn out to be a lawful shoot, because the guy had a pistol, 2 grenades and and empty courier pouch.
That Lt retired 20+ years later as a worthwhile infantry Colonel. One of a few.”
(thanks, Hal)
----------------------------