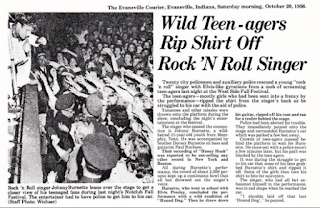 Radio was changing in 1959-60 and I had to use another name (not unusual in this biz) as I did the all night show.  I was called Larry Lite. The morning man was Johnny Dark...so it was promoted as there’s always “lite before dark” on WEEK!
I  enrolled in college at Bradley University there and changed stations to a better one..WIRL. I used my real name too!
WIRL’s claim to fame was bringing in the top rock and roll stars such as Bobby Darin, Frankie Avalon, Fabian, Chuck Berry, Buddy Holly etc for shows on the weekend.
we had them all in for shows.  That is except Buddy Holly,  Richie Valens and the Big Bopper.  Sadly, they were killed in the plane crash in Iowa ..scheduled for a show for us in Peoria in two nights.  The replacements were not bad...Fabian (my girlfriend had to open the radio station door for him)...Frankie Avalon and Frankie Ford who had the number one record in the country that very week called Sea Cruise. These guys did two shows...one in the afternoon and the main show at night.  They were always sellouts cause this was something new for the teenagers...live shows with big name record artists and we helped it catch on.
Frankie Ford hit the stage singing the “B”  or flip side of his number one hit and then went into a long dissertation about how Sea Cruise came about.  By the time he got  around to singing it the teens were down in the mouth so I took him aside and told him to just...hit it...go into it and see what kind of reaction he got.
For the second show... I watched in the back of the auditorium when he sang his first song...to polite applause...then...he took a beat kept his mouth shut and went right into Sea Cruise.  They screamed and screamed so bad he had to do it twice!  Frankie never forgot that tip.  It works.
We had them all...
Chuck Berry got out of his limo in front of the auditorium and I said...”Chuck...what’ch gonna do tonight”...and he grinned and said:” I think think I’ll do some Chuck Berry songs.”  He did and he was great.
Bobby Darin was special.  And I got him laid...twice...by a recent beauty queen.
Darin came into the control room at the radio station while I was playing Dream Lover and shouted "get that crap off" and slapped a big hard disc on the turntable and told me to play the first cut.  He had just received the disc from his record company and hadn’t heard any of the final songs.  I let him introduce the first cut on his new album...something never heard on the air anywhere.
It was Mack The Knife.  I was bored by it which shows you what I really know about rock music.  It went on to make his career and to be his top hit and one of the biggest hits ever recorded.  I got to play it first in the whole country!
A girl who won a beauty contest was at the station and I introduced them.  Darin was more than just interested.  We went out for a sandwich and afterward, I dropped them at my apartment...letting Bob use my key.  I picked them up a few hours later.
She must have been good in bed cause this whole thing was to be repeated in Atlantic City some months later.  He was playing the Pier there and  I was driving through on the way to New York with my girlfriend and his "friend".
Darin took her to his hotel for awhile and  brought her back to my hotel room in Atlantic City.   He tried to hit on my girlfriend...but I jokingly pushed him out of the room and that’s the last I ever saw of him.   Later, on one one of my trips out west I left a message for him but never got a call.  I should have told him I had the beauty queen with me!