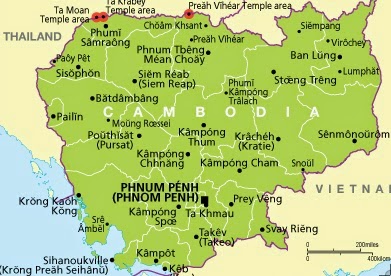 shooting the film of the coup...and getting it out of Cambodia...

This coup smelled to high heaven
Later it would be obvious that this was instigated by the U.S.  The military needed to be able to openly bomb and invade Cambodia...the key sanctuary for all those NVA soldiers I passed on the highway the day before.  So much for turning the war over to the South Vietnamese military!
I found the freelance cameraman who shot film for NBC News and we went to work.
He didn't have audio capability so I just recorded stuff on my handy cassette recorder...and even tried to do a standup report that way as I knew the folks back in New York could match the audio to the video.
We shot a bunch of film and recorded a lot of stuff but we had a couple of problems.  The first was my very presence with a cameraman and tape recorder.  I was not supposed to be there...so that killed the possibility of doing interviews, etc.
I was nervous about approaching any of the Cambodian officers.
We did film General Lon Nol as he marched into what appeared to be the legislative building near the palace but I didn't know who he was at the time and didn't approach him.
All communication in and out of Cambodia was down because of the coup. The only way we could get the film and tapes out was to drive to the Thai border and hopefully hand it over to a Bangkok staffer.  NBC news Bangkok could satellite to New York.
I found out that once you left you couldn't get back in.  And...border officers were not letting anyone new come in either...so I had a hell of a scoop.
I contacted my driver...told him of our project and advised him that we might have to sit at the bridge on the Thai border until someone from NBC News managed to show up.  He said he could probably bribe someone to let him go across and find a telephone to call NBC in Bangkok.
We headed out for what could have been a long, long drive....not in miles...the border was only an hour away...but in wait time for the pickup.
We took a different highway so there were NO enemy solders to be seen.

When we arrived at the bridge that crossed into Thailand...my driver confirmed that the border guards were not letting anyone back in...so we couldn't leave.
About a half-hour later some British journalists from the BBC pulled up...telling us they were headed for Bangkok.
I had met one of them back in Saigon so I ask him to hand carry our stuff to the NBC News office in Bangkok and he agreed.
The BBC had an ongoing deal with NBC news anyway so this was perfect and I knew he wouldn't abscond with my material.
So that was all settled nicely...and I turned to get back in the car to return to Phnom Penh when I heard someone yelling at me from Thailand...at the other end of the bridge.
It was a CBS news crew and the correspondent was begging me to help them get into the country.
For probably the first and only time I can remember not being a nice guy...I just shrugged and turned back and got in the car. Well...what would you have done?
About a month later I would be touring the CBS news offices in New York inquiring about a position.   The radio exec was interested in hiring me for top of the hour news...when the fellow in charge of foreign desk found out I was there he went into a screaming fit about not helping their crew at the border... so my possible career at CBS with Cronkite and Rather was not to be!
Everyone did make into Cambodia though in a few days after things cleared up.  I got back on the plane headed for vacation before returning to the states.
Before I left Phnom Penh the correspondent for Newsweek ask me to read over his story before he got it out to wherever. I did and it was good.
A week or so later in Hong Kong I picked up a copy of Newsweek and read an entirely different version with no byline for him.  Someone back in New York decided they knew better than the guy on the scene as to what actually went on in Cambodia.
Since that time...I've not had much faith in what I read in either Time or Newsweek.

stanmajor@aol.com
Posted by Unknown at 12:31 PM